Here is why & how to fix it

It is normal to gain and lose followers.

Your content was once attractive for someone, but now it’s not anymore.

But, suddenly, one day, you realized that your following count had dropped massively (hundreds, even thousands) of followers in a day.

You are right to be concerned because a massive drop of followers, is not usual.

Based on our seven years of experience helping accounts increase their Twitter followers, we’ve detected the ten most common reasons you could be losing followers and how you can fix it.

Stay with me to learn and assess what could be happening to your former followers that are now leaving.

Twitter is fighting hard against bots and fake accounts.

They are prioritizing the trustworthiness of the network instead of the showy number of accounts created.

How? They deactivate millions of accounts (yeap, MILLIONS!) that aren’t honoring their terms of service.

What’s the bottom line? They are getting rid of accounts that are or have the potential to harm the network.

These bot/fake accounts were following other accounts.

And perhaps, your account was followed by tens, hundreds, or even thousands of these accounts.

So, if some of them were following you, you’ll see an overnight drop in your followers.

Don’t worry though, this is not harmful to your account.

Here is a crazy thing:

Good, but how can you detect that this is the reason why you are losing followers?

If you don’t think this could be the reason, let’s move forward to the next most common cause.

When we started on Twitter, all of us wanted to show off with our follower count.

And perhaps, you fall into the trap of buying Twitter followers.

We’ve purchased Twitter followers to document the experience, so you don’t have to.

It’s a waste of time and money.

You’ll receive ghost followers that will last a couple of days/weeks. 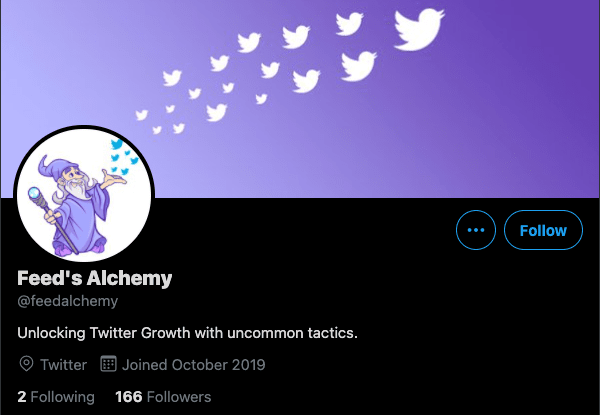 Not only did we not receive a single like/retweet, don’t even mention purchases.

As you may also notice, now they’re gone!

Once you pay for the followers, they start to follow your account, but they are rapidly gone after just a few days!

Also, those followers aren’t real accounts, to begin with.

So, if you’ve purchased followers in the past, sooner or later, they will be gone.

Be honest with yourself, move on and forget about those ghost followers you’ve lost.

3. You are posting outside of your topic.

Getting involved in politics, sports, or any sensitive topic discussion is easy on Twitter.

Just a silly reply or fav on a Tweet taking a side of a controversial topic could make you lose followers massively.

Bear in mind that when giving a fav, you are endorsing that tweet as it was yours.

Also, promoting yourself when the network is on the attention of another sensitive event could be detrimental for your account.

So, before posting a Tweet, giving a fav, or reply, analyze if the topic is in your niche.

Don’t use your account for multiple purposes (e.g., business and personal).

In some cases, your personal views aren’t the same as the views from your business, and you don’t want that to affect your follower count.

As we mentioned before, Twitter is working hard to fight against accounts that can be harming the network.

They not only apply brute force to deactivate accounts, but they also have a collection of settings to silence accounts.

Shadowban is a general term and can mean different things.

In this post, we’ll go through the Twitter ghost ban that could be affecting your follower count.

Everything will seem normal to you, but your followers might not be seeing your Tweets.

And that could lead to an unfollow since you are not posting enough.

This ban is temporary and could be for excessive tweeting or following.

Twitter relies on phone number verification to know that you are a real human being.

If you don’t have it, stop reading, and please go to associate an email and phone number with your Twitter account right now.

What’s the point with a drop of followers?

Easy, once Twitter detects that you don’t have a valid email address or phone number associated, they temporarily restrict your account.

You won’t notice it unless you open your account and see a restriction message like this one: 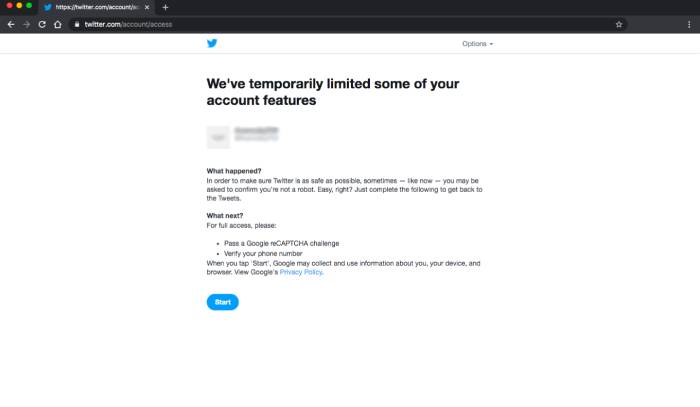 After that and until you associate a valid phone number and complete a REcaptcha challenge, your account will look like this: 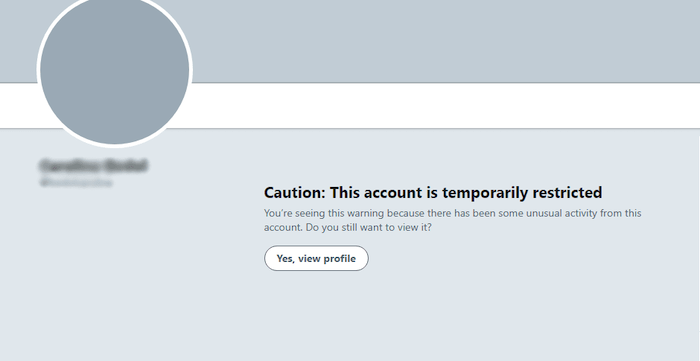 As part of this restriction, your follower’s count will be reset to 0.

That will make your account look very suspicious, and you could then lose followers.

6. You are unfollowing too hard.

You are following too many accounts.

Your timeline is constantly updating with irrelevant information.

Things are out of control!

Now, you have decided to start trimming your following.

You are cleaning your timeline and leaving just the relevant accounts that add value to your life.

Another day and 100 more dormant accounts are gone, awesome!

But, BOOM! Suddenly you realize that in the process, you are losing followers 🧐

How the heck is this happening?

Well, you didn’t realize it at first, but some of these accounts were just following you in exchange for a follow-back.

But, here is a crazy thing:

Losing these followers is not bad for your account at all.

If your followers aren’t engaged with your content, what’s the point of having them as followers?

You want to have a community of authentic, targeted, and engaged followers.

Without engagement, it isn’t beneficial having them as your followers.

As we mentioned before, it is better to have fewer, engaged followers than having ghost followers who won’t be interacting or buying what you have to sell.

If you have detected that this is the cause of losing followers, slow down your unfollow actions.

Keep cleaning your account, but more slowly to prevent a drastic drop in followers.

Don’t worry too much about that drop though, they weren’t really your fans in the first place.

7. You are self-promoting too much.

Sell-promoting too much is one of the first mistakes while trying to monetize your Twitter presence.

You enter a bar and start throwing personal cards at every person in front of you. 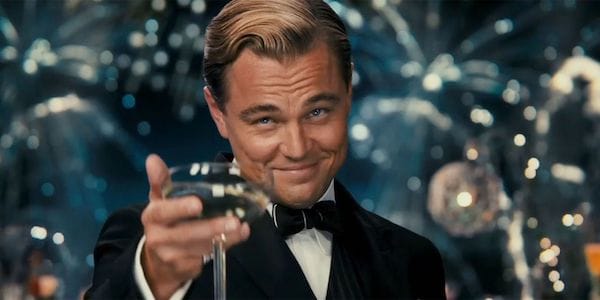 What would happen? People will run away!

That’s not the way relationships work in the real world.

People don’t want to hang out with an accountant, lawyer, social media manager, or plumber.

People want to go out and have fun with cool and interesting people and help each other out if necessary.

Persuasion tactics work the same in the physical world as in the digital world.

To explain this, we like talking about the jab, jab, jab, right hook technique coined by Gary Vaynerchuk.

You may or may not like Gary, but nevertheless, he has mastered social media for his brand and products. 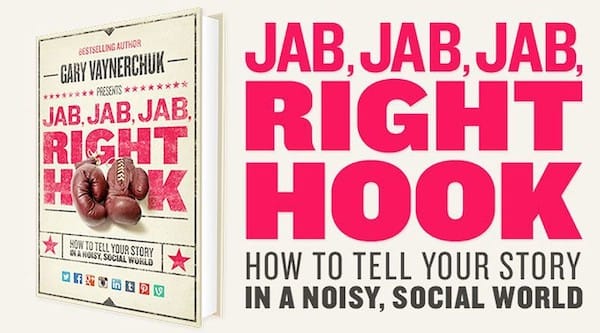 Simple, think about the following for your social media presence:

Excessively promoting yourself too much will cause people to not pay attention, to avoid you, and in the aftermath, they will unfollow you.

It’s not everything about you and your brand.

Engage in conversations and add value to others helping out just for the sake of helping.

After that, promote yourself, and you’ll start reaping the benefits of having an audience on Twitter.

8. You are posting too much.

If you have read our previous reason, you probably know where we’re going with this one.

If you are tweeting too much and some of your tweets aren’t performing well, you are probably jeopardizing your followers’ timelines.

And that has a cost:

When increasing your Tweets frequency, analyze the impact on your follower count.

Everyone asks the same question when debating about frequency:

And the answer is:

We are not covering this topic in this post, but you can learn about it here.

9. You are not posting enough.

Everything in life has to have a balance.

The yin and the yang.

The good and the bad.

Tweeting too much and not tweeting enough.

How many times do you open Twitter, and suddenly a tweet pops up from someone and you don’t even know who it is?

One of your first takes on this will be to unfollow that account.

Balance your amount of tweets, not too many or too few tweets per day.

If you haven’t changed your Twitter handle or profile pic in a while, most of your followers will recognize you as soon as they see a tweet.

But, if you update your profile or name without notifying your followers, that could lead to confusion:

Here is when the simple tweet with #NewProfilePic hashtag comes in handy.

If you’ve changed your handle, you can put a hint in your bio: “Previously tweeting as @” or something like that helps your followers know it’s not an unwanted account in their timeline.

We expect to have shed some light on the loss of your followers.

Don’t obsess too much about your losses unless your account loses more than it gains month after month.

Then you’ll have more control over your gains than your losses.